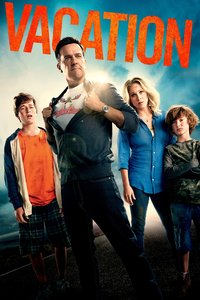 Functioning as both a reboot of, and a sequel to, the original 1983 Vacation movie, this relentlessly low-brow “family” comedy generates a decent chuckle here and there, but relies too heavily on gross-out gags to qualify as a genuine success.

Ed Helms plays the grown-up Rusty Griswald, who now has a wife (Christina Applegate) and two young sons of his own. Despite enduring hell attempting the very same journey there as a boy, Rusty is determined to take his family on a road trip across America to visit amusement park Wally World in California.

A little more ready to break away from reality than its inspiration, the new Vacation centers far too many of its jokes around puke and poop. Which can get a little tiresome, unless you love jokes about poop and puke.

The fifth actor to play Rusty Griswald, Helms proves a game lead, and his mawkish charms carry the film a long way. Applegate is also appealing, and some moderately progressive character tropes are explored with their meek eldest son James (Skyler Gisondo).

Low-brow doesn’t have to mean low-laugh rate. But in this case, there’s more poop than punch.