The Best Movies Ever: Metropolitan (1990) 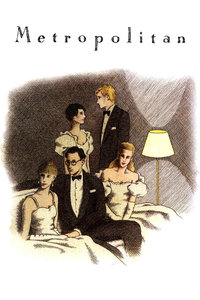 The latest entry in an ongoing feature in which I will cite all my favorite movies one-by-one, and attempt to describe what makes them so great. This time, it’s Whit Stillman’s timeless, influential and still underseen debut, Metropolitan.

As recently reaffirmed by his new film Love & Friendship, Whit Stillman is a singular talent in contemporary American cinema. Comprising a distillation of the sensibilties of Jane Austen, Woody Allen, F. Scott Fitzgerald and Evelyn Waugh, his stylized, genteel dramedies are notable antecedents to the aesthetically comparable work of Wes Anderson and Noah Baumbach.

Stillman’s dialogue has the mannered specificity of David Mamet’s, but it’s all delivered so politely, you find yourself wanting to step into the conversations taking place on screen, sardonically-delivered debates about group social activity; snobbery of all kinds and the various methods used to measure happiness in life. His films ooze a cultivated charm that’s hard to find, and never more so than in his sublime debut.

A slighty optimistic take on the Specious Clique Adoption story, Metropolitan tells its story through the eyes of Tom Townsend (Edward Clements, never to be seen again), an Ivy League college student of modest means. Throughout the Christmas debutante ball season, Tom gets drafted into an exclusive group of rich preppy Upper East Side types known as the ‘Sally Fowler Rat Pack’, who find his outspoken political views and understated wit amusing enough to keep him around.

Most of the film is set at the SFRP’s after parties that follow formal debutante events, where the young cast drink, verbally spar, do the cha cha and play strip poker.

In Stillman’s mind, the film was set in the late 1960s, but he didn’t have the budget to make it period, so it exists in a kind of timeless New York, where certain old traditions remain and the idea of ‘society’, or at least a lament for it, still carried some dramatic weight.

A superlatively charming film that gets better with every viewing, Metropolitan marked the screen debut of Stillman’s muse and on-screen proxy, Chris Eigeman, who is hilarious as an articulate cad, and who would go on to lead Stillman’s next two films playing very similar characters.

30 seconds into the clip embedded below, Eigeman’s Nick responds accordingly to a typically grandiloquent statement from his friend Charlie, played with hilarious pomposity by Taylor Nichols, another Stillman find who deserves better roles.

The acronym discussed above by Nick and Charlie came to be utilized by fans in an informal designation for Stillman’s first three films, Metropolitan, Barcelona (1994) and The Last Days of Disco (1998) which are often referred to as the ‘UHB Trilogy’.