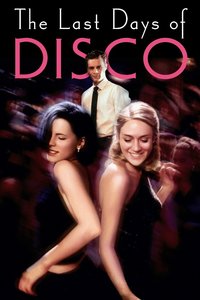 The latest entry in an ongoing feature in which I will cite all my favorite movies one-by-one, and attempt to explain what makes them so great. This time, it’s the film I may have watched more times than any other: Whit Stillman’s joyous ode to idealized socializing, The Last Days of Disco.

Coming after Barcelona (1994) and Metropolitan (1990), the culmination of Stillman’s UHB trilogy is technically second in the overall story told.

Stillman broke from his tradition of surrounding Chris Eigeman with unknowns by casting the then-nascent actors Chloë Sevigny and Kate Beckinsale in the lead roles for what would be his highest profile film yet.

They are both magnificent as Alice and Charlotte, two college graduates working at a big New York publishing house in “very early 80s” Manhattan. Although the hilariously cynical, but still romantic, portrait of the book publishing industry is worth watching the film for alone, more time is spent with Alice and Charlotte as they negotiate friendship and romance at ‘The Club’, a barely fictionalized analogue for Studio 54. There they hook up, break up and break out on the dance floor to a totally rad soundtrack. But mainly, they talk.

The dialogue in Disco takes Stillman’s spry wit to a whole new level, there isn’t a single redundant syllable to be found in the dense repartee that fills this film. It brings the playful group banter of Metropolitan into a more emotionally and sexually frank context.

Sevigny, and especially Beckinsale, have rarely been better, and the manner in which their ‘friendship’ drives the plot is hilarious and insightful. Beckinsale is a polished, articulate monster who calmly dishes out devastating takedowns in the name of advising her friend-turned-roommate.

Chris Eigeman has fun taking his classic Stillman character to an inevitable extreme (“I thought you were a wonderful man, Des!”), although Beckinsale beats him at his own game, taking control of the film as the director’s principle on-screen voice. Her entitled indignation revealed an aspect of Beckinsale’s talent that subsequently remained relatively untapped until recently when re-united with Whit Stillman for Love & Friendship, which has Beckinsale hilarously back in devastating form.

Continuing a troubling and inexplicable trend amongst Stillman’s male players, stellar performances by Mackenzie Astin and Matt Keeslar in The Last Days of Disco were not reflected in the quality of their subsequent careers.

And although Hollywood is now well-attuned to the superlative talents of Matt Ross (currently killing it as Gavin Belson on Silicon Valley), it took longer than it should’ve. He’s absolutely hilarious in Disco as Departmental Dan, a “serious” co-worker of Alice and Charlotte’s who claims to be against everything The Club stands for, yet can’t hide the glee from his face when he goes there for the first time.

There are also great supporting turns from actress-turned-fashion designer Tara Subkoff, and actor-turned-director Burr Steers, whose awesome 2002 film Igby Goes Down overlaps with Stillman’s work in some regards. As does, one supposes, his more recent effort, Pride and Prejudice and Zombies.

Characters from both Stillman’s previous films Barcelona and Metropolitan show up in brief cameos in The Last Days of Disco, and several others are name-checked. Taylor Nichols has two cameos—one as his character from Metropolitan, and one as his character from Barcelona. Stillman was waaay ahead of Marvel Studios with this whole shared universe thing.

Its legacy long confused with that of 54, 1998’s other disco-centric lament, The Last Days of Disco remains something of an undiscovered gem, deserving of a much wider audience.