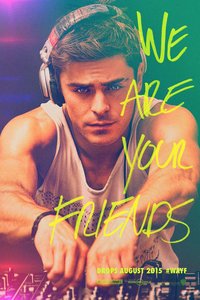 Instantly more famous for how little money it made on its opening weekend (a new record low for a wide release) than for anything that happens in the film, this would-be zeitgeist-capturing drama about DJs contains absolutely nothing original, but at least it looks like the characters are actually having fun.

An equally as earnest attempt to cash in on a thriving sub-culture as, say, 1985 cult classic Rappin’ the way this film wears its shameless heart on its sleeve makes it impossible to ever take seriously. It also makes it kind of hard to hate — the puppy dog spirit of the enterprise is well-represented by Zac Efron’s boyish want.

Although there has been no effort to texture up the ‘running-down-a-dream’ storyline, the film halfway-qualifies as a party movie before the lesson-learning kicks in.

For the majority of its 90 minutes, the film flirts with presenting a casual portrayal of youthful drug use, and almost gets there before inevitably going where every film with this kind of storyline must.

Ratajkowski acquits herself with dignity for the most part, although her dancing scenes inspire a leeriness in the camerawork that would make Michael Bay blush.

And Bentley’s presence mostly caused me to ponder how the one-time NBT is now playing ‘mentor’ roles. Dim your eyes a little though, and James Reed could almost be Ricky Fitts, fifteen years later.

We Are Your Friends’ principal crime appears to be attempting to capture on film something that resists capturing, which isn’t really that terrible an offence.

As douchey as the four guys at its centre often are, they’re not the worst human beings who ever lived.