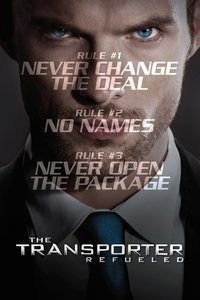 As cheesy as they often are, the action films released by Luc Besson’s EuropaCorp — which include the Taken and Transporter series — do a lot to help maintain the tradition of a certain kind of movie, and should be applauded for that. That doesn’t mean always they’re always good, though.

Perhaps best known for playing the first Daario Naharis in Game of Thrones, Ed Skrein takes over from Jason Statham in the title role of this mild reboot of EuropaCorp’s signature franchise, which sees lethal courier Frank Martin teaming up with his pop to assist a cadre of vengeance-seeking French prostitutes.

Skrein has proved himself a convincing ass-kicker in other contexts, but he suffers greatly in comparison with his predecessor in this role. Statham was an agile cinder block, and makes the new guy seem about as hard as fresh pasta.

Statham was also able to undercut the ridiculousness with a sly grin here and there, but all Skrein can do is grimace intensely.

It speaks to the film’s fatal case of humorlessness. The plot never makes sense for a single second of screen-time — a little self-awareness would’ve gone a long way.

The automobile action set-pieces are typically impressive, although there’s very little connection between the external carnage and the lame quips being dished out inside the car.

As with a lot of EuropaCorp’s action entries, there’s a surfeit of ladies who kick ass, which is nice in theory, but these characters revert to giggling, pants-dropping stereotypes at a moment’s notice.

As Anna, leader of the avenging angels, French actress Loan Chabanol is forced to deliver the following line with a straight face:

“I come from an impoverished village.”

It also features some of the most inelegant product placement this side of Skyfall.

Ray Stevenson (Thor, Rome) is a welcome presence as Frank Martin, Sr. — he livens up the proceedings whenever present. They should’ve made him the lead.