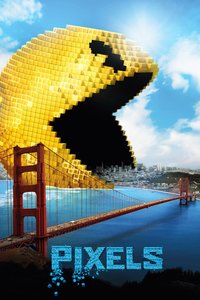 A high-concept comedy with plenty of production value and even more commercial ambition, but very little in the way of energy, wit or genuine fun.

Adam Sandler stars as an ’80s video game champ who is drafted in by his old pal the U.S. President (Kevin James) when aliens invade taking the form of Pac-Man, Donkey Kong and other classic game characters.

Based upon a short film of the same name and cribbing shamelessly from a Futurama episode with the same idea, Pixels rarely lives up to the potential of its central thrust — this is a brand exploitation exercise first and foremost, and the movie never lets you forget it. There’s very little sense of real affection for the intellectual property at its core.

Audiences have learned not to expect much enthusiasm from Sandler these days, but he barely looks awake in this film.

As a former rival-turned reluctant ally, Peter Dinklage attacks his character with gusto, but few of his jokes hit. Gad is high energy as a former boy wonder, and delivers most of the film’s genuine laughs. Brian Cox seems embarrassed to be there.

Some of the imagery is occasionally captivating, but the entire enterprise is felled by a pronounced intangibility which undermines any and all supposed stakes. Not a bad hate-watch, though.