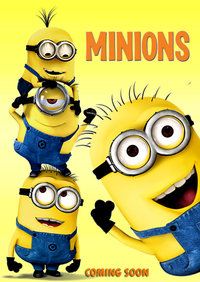 The little yellow scene-stealers from the Despicable Me movies take centre stage for this relentlessly charming prequel which chronicles their lives before they came into the employ of loveable supervillain Gru.

According to Geoffrey Rush’s narration — which takes on an extra significance when your main characters speak in barely-discernable (though always hilarious) gibberish — the Minions have been dedicating themselves to the most despicable types around since the time of the dinosaurs.

After an extended period in hiding following the accidental death of their last few mentors, three plucky little Minions named Kevin, Bob and Stewart set off into the world of 1968 to try and find a new supervillain to serve. When they align themselves with the nefarious Scarlett Overkill (Sandra Bullock), they are subsequently tasked with stealing Queen Elizabeth’s crown.

The Minions were always the best thing about the Despicable Me films, and they easily carry their own movie. The charmingly off-kilter design aesthetic stretches into the humor of the film, which is much darker than most films aimed at kids, and makes for a consistently refreshing point of difference. Death is often played for jokes here, and I liked it.

Minions may not be anywhere near as profound as Inside Out, but it’s definitely way funnier.