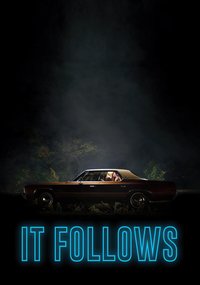 Since dazzling film festival audiences the world over last year, this superlatively creepy American indie has gone on to become a sleeper box office hit and the most acclaimed horror film in decades.

It easily bears that reputation — I can’t remember the last time a movie got so effectively under my skin.

Maika Monroe plays a young woman who consumates a burgeoning relationship, and is promptly informed by her date that he has passed “something” on to her. She naturally thinks he’s crazy, but soon, no matter where she is, someone is walking towards her, in pursuit. The pursuer usually looks takes the form of a stranger, but not always.

Fulfilling the potential of the premise with rare confidence, It Follows generates a special type of unease which takes hold early and never lets go, building all the way. The film’s ability to mine genuine dread from everyday situations is its true masterstroke — you’ll never feel at ease in a crowd of people again.

Accordingly, if there’s any horror that would benefit from being experienced in a theatre as opposed to a living room, it is this.