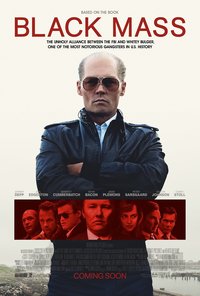 With his audience goodwill somewhat eroded by a string of gimmicky performances in big-budget flops, Johnny Depp appears to be attempting to restore some of his serious actor credibility playing a stone-cold killer in this grim biopic about notorious Boston underworld figure James ‘Whitey’ Bulger.

Calmer here than he’s been on screen for a while, Depp is occasionally genuinely chilling. But he’s not helped by the film’s attempts to make the olive-skinned epitome of male beauty appear like an aging, pasty Irish gangster. The piercingly blue contact lenses and less than convincing baldness never stop being distracting.

As assured as their depictions are, many of the set-pieces feel a little too familiar, cinematically speaking.

There is one major point of difference in this story though — Bulger teamed up with his childhood friend-turned FBI agent (Aussie Joel Edgerton, who doesn’t really look Irish either) to bring down Boston’s ruling Italian gangsters, making the government agency complicit in Bulger’s murder-laden rise to power.

The potentially powerful thread plays out with surprisingly little tension, which is emblematic of how the film’s episodic nature hinders the development of any emotionally resonant throughlines.

There’s a bunch of amazing actors here doing fine work (Peter Sarsgaard and Corey Stoll are both especially great) — almost too many: all the big names (including Benedict Cumberbatch and Kevin Bacon) in character roles are each granted a scene or two or three and that’s it. It prevents any one character, even Bulger, from becoming fully formed.

Undeniably entertaining in the watching, Black Mass is ultimately lacking in lasting impact.